Behind the Bloody Hand 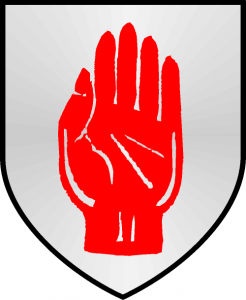 While visiting my ancestral home in County Tyrone, Northern Ireland, it is impossible to escape the images of the bloody hand. It appears in various forms, sometimes with lions, a fish, a crown or a knight’s helmet. It can be found on the side of buildings, on flags, at sports complexes or in pubs. And they all tie into the O’Neill’s family crest.

I wrote about the bloody hand in my latest book, Clans and Castles, the first in the new Checkmate series of historical books about my ancestors. The scene takes place in 1608 between my ancestor, William Neely, and an Irish lady named Penarddun who had sewn the Neely family crest for him:

Penarddun slipped her long fingers under the wool and retrieved a piece of material that had quite obviously been painstakingly constructed. In the center was a castle with three turrets sewn in a grayish-black color, above which was the Red Hand of the O’Neill clan.

“I am afraid I do not, Lady Penarddun, though I have seen the hand.”

“Aye, and I am sure you have. It is the Bloody Hand of the Clan O’Neill. It is said that in the days of the Celts, several great chieftains sailed across the waters. They spotted the beautiful Irish coast and as their eyes fell on the magnificent shades of green, they debated who would lay claim to her. Ah, but they were powerful competitors, they were, and after great deliberation they decided they would each row a boat toward the land and whosoever touched her first would lay claim to her.” 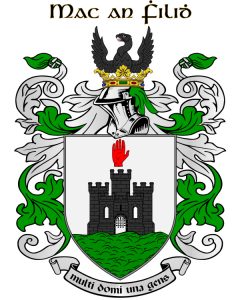 She placed both hands on her knees, her eyes staring into the forest and yet seeing something miles and centuries apart. “So off they rowed, and it was a fierce competition, it was. The weaker ones dropped back and seeing that all was lost, they watched as two neared the shore. Oh, they were so close that none could tell who would reach it first and as the final stretch was there for the taking, Niall could not bear to lose that beautiful, precious land. So he reached to his axe and he severed his left hand at the wrist and with his right, he tossed it to shore.”

She smiled. “Aye, and so Niall won, you see, for it was his hand that touched Eire first. It was in the days before we were told we needed last names… So his descendants called themselves ‘uá Niáll’ to mark themselves as the children of the champion, and it’s since been changed to O’Neill. And there you have it.”

As she handed him the material, he said, “You are too kind, Lady Penarddun. But I do not understand what the Bloody Hand of The O’Neill—”

“Your ancestors, dear boy, were descendants of Niall. You are related to the O’Neill clan.”

This was a bombshell revelation to my ancestor because O’Doherty’s Rebellion had begun. Led by the last Gaelic Irish King Cahir O’Doherty, clans that included the O’Neill, Maguire, O’Cahan, O’Donnell, MacSweeney and more united against the Scottish and English settlers, burning their settlements in an attempt to drive them out of Ulster. But Wills, who had immigrated to Ireland from Wigtownshire, Scotland in 1608, was to discover that four hundred years earlier, the Neely family had left Ireland for Scotland—which meant he had come full circle. It also meant that he would soon face off against distant relatives on more than one battlefield; one side would fight to the death to keep Ireland Irish while the other would fight for King James I of England to claim it as a colony.

The words on the Neely family crest mean “One Family, Several Countries” as the family eventually immigrated to such diverse places as Canada, the United States and Australia. Shown here is a modernized version of the family crest.

I did not know what I would find when I began to explore William Neely’s journey from Scotland to Ireland. I found much more than I could have imagined because it was a fascinating period where cultures collided; the Gaelic Irish population against the Scottish and English settlers, the Gaelic Kings against Queen Elizabeth I and then King James I, ultimately the Catholic faith against the Church of Ireland’s Protestants, betrayal… and death.

Below is a trailer:

Clans and Castles, the first book in the Checkmate series is available on amazon in Kindle and Paperback, and available in all fine bookstores worldwide. Autographed copies can also be ordered from the author’s website. p.m.terrell is the award-winning, internationally acclaimed author of more than 21 books in a variety of genres.