The Journey of the Scots-Irish

The odyssey into my family’s history has taken me to unexpected places, and anyone of Scot-Irish (or Scotch-Irish or Scots-Irish) descent likely has ancestors that traveled a similar path. Scotland is only twenty miles or so across the Irish Sea from Ireland and the inhabitants of both countries likely sailed from one country to the other at various times. But the modern version of the Scot-Irish descendent has its roots in the 17th century and specifically between 1606 and 1652.

In the late 16th century, Spain and England were at war. And in 1588, Philip II of Spain dispatched 130 ships in a failed effort to invade England. Having been defeated at the Battle of Gravelines, the Spanish ships attempted to return home by taking a route around western Ireland when they were caught by a massive storm, blown off course and onto Ireland’s western coast. Queen Elizabeth I believed the Spaniards were attempting to occupy Ireland and she sent a substantial force to stop the invasion. With rumors that Spain was sending additional troops to assist Ulster’s Hugh O’Neill in driving out the English, the English onslaught was merciless. Around 5,000 Spanish were killed and those few that survived escaped across Ireland and the Irish Sea to Scotland and the English occupation of Ireland began in earnest.

When King James I ascended to the English thrown after Elizabeth’s death, the age of colonization began in full swing. King James wanted more Protestants loyal to the English Crown in Ireland to prevent Spain from attempting another invasion and to ensure that Ireland remained an English colony. Scottish Lowlanders were encouraged to relocate to Ireland, particularly Ulster. Scottish Highlanders were forbidden from participating in the relocation because they were largely Catholic and they had been less agreeable to England (to put it mildly). 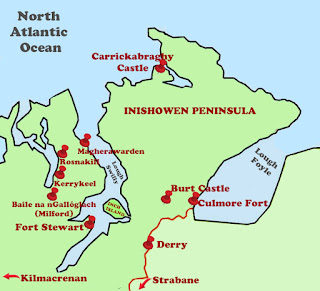 In 1608, my ancestor, William Neely of Wigtownshire, joined Captain William Stewart and moved to Donegal. Fort Stewart was eventually erected on the Lough Swilly just across the water from the Inishowen Peninsula. That Peninsula was in the firm control of Sir Cahir O’Doherty, whose family had ruled Inishowen for more than one thousand years. 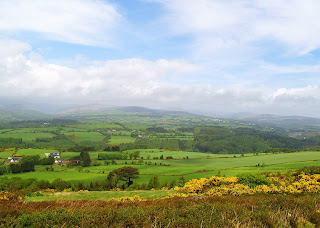 In discovering my roots, I discovered the role that the Scot-Irish played in Ireland’s history. Born in Scotland and migrating to Ulster, they formed Plantations similar to those in America’s Deep South, consisting of potato or vegetable farms and cattle and sheep herding. The men that journeyed there were searching for a better life, as the Scottish Lowlands had been deforested and were in a bleak state in the early 17th century. However, it meant displacing the native Irish – and therein lay the conflict.

William Neely and William Stewart were to come face to face with the chieftains of powerful Gaelic Irish clans, including Cahir O’Doherty, Niall Garbh O’Donnell, Phelim MacDavitt and The MacSweeneys. And the struggle for the future of Ireland would pit the native Irish against the Lowland Scots, culminating in O’Doherty’s Rebellion. 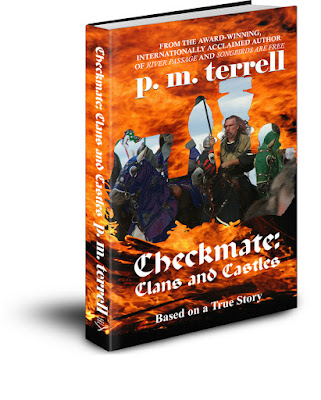 The first book in my new series, Checkmate, is entitled Clans and Castles and it begins with William Neely joining Captain Stewart in sailing to Ulster and settling in Donegal. It introduces the complexity of the relationships between the Irish chieftains and the settlers, leading to O’Doherty’s Rebellion and its aftermath.

If you are a descendent of Scot-Irish heritage, this is your ancestor’s story as well.

It is now available on Kindle and in other formats on Smashwords, and available in the iBooks store, Barnes and Noble Nook and other eBook stores. The paperback is available in all fine book stores, online and physical. If you’d like a personalized autograph copy of Clans and Castles or any of my books, please purchase through my website. Free shipping!

I hope you’ll join me in taking a look at our ancestors’ lives and seeing them come alive through the pages. For more information, check out my website. This is the first in a new series that will take the Neely family – and the Scot-Irish – through a journey that begins in the 17th century and is on-going today. The series will cover a number of events and rebellions in Ulster eventually leading to Irish independence for the Republic of Ireland but the establishment of Northern Ireland remaining under British rule, as well as both World Wars and the migration of the Scot-Irish from Ulster to America and beyond.

Watch the short video below about Clans and Castles.

p.m.terrell is the internationally acclaimed, award-winning author of more than 21 books in various genres. Her love of Ireland is apparent in her suspense books such as The Tempest Murders, The White Devil of Dublin, Dylan’s Song and Cloak and Mirrors. Her most popular book is Songbirds are Free, the true story of Mary Neely’s abduction by Shawnee warriors in 1780 near Fort Nashborough (now Nashville, TN), and River Passage, the true story of the Neely family’s river journey to Fort Nashborough at the height of the Chickamauga Indian Wars won the 2010 Best Drama Award.