Walking in an Ancestor’s Footsteps

What if you could walk in your ancestor’s footsteps?

Today’s environment comes with a host of challenges, including economic recession, political drama, declining industries, a shrinking middle class, wars and threats on multiple fronts. It might be easy to come to the conclusion that living in today’s day and age poses more challenges than ever.

But what if you could take a step back in time to live as your ancestors did? What do you suppose you would find there?

I discovered a series entitled Victorian Slum House that takes modern-day families and places them in the environment of their ancestors. The day-to-day struggles are an eye-opener. Consider that during the 1870’s the average lifespan in areas of London was 28. Or the 91,000 Irish that immigrated to London in search of work, many of whom came because they had watched their own family members starve to death during the potato famine. One couple, when arriving in London, discovered lodging meant renting a coffin-shaped bed for eight hours, surrounded by dozens of others; or when the bed could not be afforded, one could sit on a wood bench with a rope that prevented falling off it during sleep for half the cost.

It may be easy to think that if we are doing well economically today, our ancestors did as well. Perhaps we have an image of our ancestors living a simpler life but having all they needed—plenty of food, a stable roof over their heads and adequate, steady employment. The reality, however, may be far from that.

When I began writing Clans and Castles, the first book in the Checkmate series, I was astounded at all I learned about Wigtownshire, Scotland in the early 17th century. The Lowlands of Scotland had become so deforested that it was a crime to cut off a branch, fell a tree or damage a sapling. Tenants often received their homes as part of their payment for work on a laird’s property, and they were moved on an annual basis. Because of that, they tended to build houses that could be erected within two days’ time and often blew away during major storms. They did not understand rudimentary agriculture such as irrigation but often thought if the land was too wet or too dry, it was simply “God’s will”.

It was that environment that my ancestor, William Neely, was born into. At the age of 18, he had the opportunity to leave Wigtownshire for Ulster—an opportunity he jumped at. In the scene below, Wills is with his friends Fergus and Tomas discussing a beautiful woman he has fallen in love with but her father doesn’t seem too keen on him:

“You have been unusually silent since you returned from dinner last eve,” Tomas said. “Things didn’t go well with the lass?”

Wills sighed. “They went well with her, aye. ‘Tis her father I am worried about.”

With the ropes secured and a short stretch of northward sail before them, Wills leaned against the railing and looked his friend in the eye for a moment. “I am afraid he could be looking for a nobleman for his daughter.”

“Ha! And didn’t we tell you?” Fergus said. “What would she want with the likes of you? More importantly, what would her da want?”

“What of your family?” Tomas pressed. 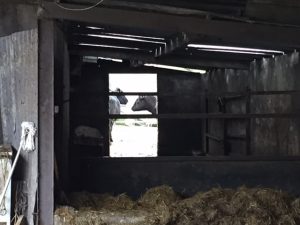 Wills shrugged. “Truth be told about it, they are tenant farmers—same as the three of us are here. Oh, and for sure, the Neely family has a decent reputation, one that has served us well. It has been a long time since our house and lands were rotated, so the house is sturdier than most and we’ve served the same laird for several generations now, we have.”

“Ah, but there’s the rub, ‘ey? Her father is looking for a nobleman for his daughter; a landowner. And a tenant farmer never owns the land himself, now does he? He tills it or he ranches it for the pleasure of the laird, and at his displeasure, he can be sent packing. ‘Ey?”

He nodded and turned to face the ocean waves. The mists were heavy this morning, the skies gray like his heart at the moment. “But though her da has lived in Donegal for two decades, at least, I had the impression his family was not of there.”

“So why does a man leave all he has ever known for the wilderness of Donegal?” Without waiting for a reply, he jabbed his finger in their direction. “I’ll tell you this, I will. No man leaves home if there is something there for him.”

“I am suggesting that Varney Ó Dálaigh is a self-made man himself. See, here’s the thing: when a man is at the top of the heap, there is no reason for him to leave that. He may own lands, a manor house or a castle, even; he might have the ear of his noblemen neighbors, a place in his community. Why would he give up all of that to travel to a place so vastly different?”

Fergus and Tomas grunted but whether they approved of his logic, Wills couldn’t tell. After another moment of thought, he added, “I’d be willing to bet, I would, that he had nothing to keep him close to his family for a man does not leave home unless he sees a brighter future for himself and his children elsewhere. He brought his wife to Donegal as well, which means at the time he knew he would not likely be returning, and with his two daughters having been born in Donegal, I believe it’s safe to say that he has determined he is better off now than he was before.”

“So where does that leave you?” Tomas asked.

“Truth be told, I left Wigtownshire for the same reason, I did. I knew I was leaving. I just didn’t know when or how.”

“But that doesn’t answer the question, now does it?”

“Oh, I have an answer alright. I do. I came to Ireland to make something more of myself than I figured I could do where I was. And that I will do, or die trying. It’s just now the timetable has sped up a bit, ‘ey?”

If you could place yourself in your ancestor’s shoes, where would you be? Who would you be? How vastly different would your life be from what you are experiencing today, here, in the 21st century?

My ancestor’s life was to change dramatically when Cahir O’Doherty, the last Gaelic Irish King, launched O’Doherty’s Rebellion and he found himself fighting for King James I of England. His actions on the battlefield would set in motion not only his own fate but those of future generations.

p.m.terrell is the award-winning, internationally acclaimed author of more than 21 books, including Songbirds are Free, the true story of Mary Neely’s capture by Shawnee warriors; River Passage, the true story of John Donelson’s river journey to Fort Nashborough; the award-winning series Black Swamp Mysteries and award-winning Ryan O’Clery Mysteries, and more. A full-time writer since 2002, she founded Book‘Em North Carolina and The NovelBusiness to assist other authors and connect readers and authors. Visit www.pmterrell.com for more information.