Genealogy research is one of the most popular hobbies in America. In discovering our roots, we discover ourselves. 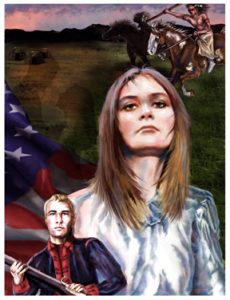 A few years ago when my book Songbirds are Free, the true story of Mary Neely’s capture by Shawnee warriors was released, I was contacted by a Neely descendant. She told me that when she was growing up, she always felt out of place; she never looked like anybody else and it had shaken her confidence. When she saw the picture of Mary Neely along with a police artist’s regression sketch, she felt as though she was looking at herself. It turned out that she lived in a part of the country that was heavily Hispanic and her pale Irish skin, hazel eyes, light hair and slight figure was in contrast with the olive complexions, brown eyes and hair and more robust physiques.

In learning of her Scots-Irish heritage, it opened doors for her—just as it had for me. Since that time, I have delved deeper into my family history. Scores of people spend untold hours placing names in perfect boxes to form extensive family trees, but I always wanted to go deeper. I wanted to know who my ancestors were, why they did what they did, what experiences formed their lives.

My father and brothers were deeply involved in establishing our more recent past, going back to the American Civil War and Revolutionary War. I wanted to go back even further to the time before they left for America. I wanted to know why they left all they had ever known—their culture, their language, their friends and family, to move to a country halfway around the world they had never visited and knew little about.

My quest for knowledge led me to William Neely. In 1608 at the age of eighteen, he left Scotland for Ulster, not knowing that the Neely family had lived in Ulster until the 1200’s. He was, in a sense, going home again. I wrote in Clans and Castles, the first book of the new Checkmate series, his thoughts as he sailed westward with Captain William Stewart:

But isn’t that why men leave? He thought. For a man that is content with his lot, one with standing in the community and a future laid out before him is rarely the man that leaves for the unknown. But take a man with poor prospects of employment, one with a doubtful future, and he has but two choices. He can remain where he is for the simple reason that he has always been there, and take what Life may send him; or he take his destiny into his own hands and set sail for the unknown in search of new opportunities and a brighter future.

At the time William left Wigtownshire, the Lowlands of Scotland had been deforested to the point that it was a crime to damage a sapling, a tree or even a branch. The class system had ensured that those born into nobility remained in nobility and those born with a lesser standing had little or no prospects for improvement. Sandwiched in between the English to their south and the Highlanders to their north, they were often caught in the middle of the fierce battles between the two. So it was when King James I of England offered land to Scottish Lowlanders in Ulster as part of his colonization efforts (the same efforts that landed the British on American shores), he jumped at the chance. He was searching to make his life better and in so doing, he changed the course of history for his Neely descendants.

His experience was not to be smooth, however, as the Irish continued to fight against oppressive edicts against their religion and their native birthrights. The land that was given to Captain Stewart, which was the land on which William first lived and worked, was sandwiched between the Gallowglass MacSweeneys (of Highlander and Viking stock) and the Gaelic clans of the O’Doherty, O’Donnell and more. 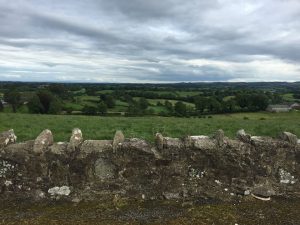 Going to Ulster and standing on the land my ancestors once owned was a life-changing experience for me. Looking at the cemetery situated on a hill so it would always overlook their holdings was like no other experience I’d ever had. Visiting a local historian and finding our family tree written in pencil a hundred years prior on the back of wallpaper was a memory burned into my consciousness.

I understand why many of William Neely’s descendants chose Virginia and Tennessee when they immigrated to America, for the rolling green hills must have reminded them of Ireland. My ancestors became ranchers and farmers, taking what they knew of cattle and sheep as well as farming vegetables, and creating enterprises in America that mirrored what they had built in Europe. They were tough and had to be tough to carve out lives for themselves against the Native Americans warring against them—just as they had carved out lives despite the Gaelic Irish efforts to drive them out.

In return, I’d like to think they made things better. When visiting Ballygawley, County Tyrone, Northern Ireland, I was happy to learn that William’s descendants, who had been given 1,000 acres at Ballygawley-Glencull, had donated land for the Irish Catholic church and school, despite the fact that they were Protestant. I learned that during the heated troubles between the two religions, the Neely family often hid the priests to protect them from harm.

And later, after coming to America, I learned that Mary Neely—the one that had been captured by the Shawnee and kept as a slave for three years before her escape and journey home—had learned so much about Native American medicine that people of all races traveled a hundred miles to see her and hopefully be cured by her.

Are you interested in genealogy? Have you explored not only the names and dates of your ancestors but also who they were, what they accomplished and what motivated them to do what they do? I would love to hear about it!

Read a free excerpt from Songbirds are Free, p.m.terrell’s bestselling book about Mary Neely’s capture, Shawnee captivity, escape and journey home. Read a free excerpt from Checkmate: Clans and Castles, based on the true story of William Neely and O’Doherty’s Rebellion. p.m.terrell is the award-winning author of more than 21 books in a variety of genres, including the award-winning River Passage, the true story of the Donelson journey westward at the height of the Chickamauga Indian Wars.