The Night of the Big Wind 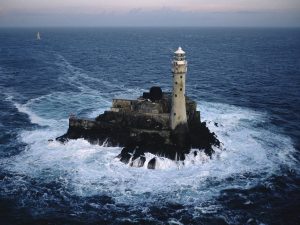 January 6, The Day of Epiphany, is the anniversary of The Night of the Big Wind, one of the most devastating storms in Ireland’s history. There had been a religious group that believed the world would end on the Day of Epiphany in 1839. So when this unusual storm swept across Ireland, it was believed by many to be the end of the world.

The storm, also known by its Gaelic name, Oiche na Gaoithe Moire, actually began on January 5 when an unusual snow storm blanketed much of Ireland. But January 6 dawned quiet and bright and temperatures rose swiftly, melting the heavy snow. This was a time before weather forecasters could easily get warnings out to the public, so children were playing outside while women were busily preparing for the Feast of the Epiphany.

By mid-afternoon, a dense cloud had covered the island and winds seemed to come out of nowhere. By many accounts, the wind appeared to whip the Atlantic Ocean into a frenzy so dramatic that it swept the ocean as well as the melting snow all the way across Ireland, from west to east. Even Dublin, on the far eastern edge of Ireland, suffered heavy casualties.

By the evening of January 6, the winds had increased to hurricane force as a cold front from the north merged with the warm temperatures of the south. Livestock were swept away in the fast-moving waters as creeks turned to rivers. Fields were stripped bare. Many poorly constructed homes were swept into the raging waters. Even historic castles made of stone were heavily damaged; some remain to this day unrepaired.

The waters rose so high that houses were flooded when the waters came rushing down the chimneys. A full 25% of Dublin’s buildings were damaged or destroyed.

It is said that in the single Night of the Big Wind, the storm was responsible for more deaths and homelessness than the mass evictions that transpired from 1850 to 1880 – a 30-year period. To this day, that night has become ingrained in Irish history and folklore.

In The Tempest Murders, I used the Night of the Big Wind as the backdrop to a series of murders that culminated in Rian Kelly losing his beloved Cait at the hands of the killer as the storm swept through the village. The book picks up with Ryan O’Clery in present-day North Carolina as Hurricane Irene is sweeping across the Atlantic toward the coast. A detective, he is working a series of murders that are identical to the ones his ancestor, Rian Kelly, was investigating in 1839. When he realizes the next target is his soul mate, Cait, he becomes convinced that they are the reincarnation of his ancestor and his beloved – and that the killer is determined to separate them by death once more. It is the story of what lengths one man will go to alter his destiny and that of the one he loves.