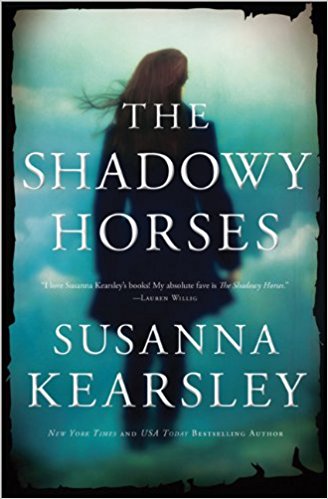 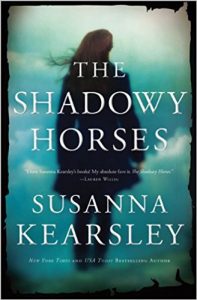 In The Shadowy Horses by Susanna Kearsley, archeologist Verity Grey begins an excavation in Scotland. The Ninth Roman Legion was rumored to have camped there as they marched north from York to fight the Scots, and the owner of a remote manor house is convinced his property contains the bones of the lost legion.

From the first night in the manor house, Verity hears the horses thundering across the fields beneath her window, whinnying and snorting as their hooves pound the ground. Yet when she begins her first day of work, she discovers there are no horses within miles around.

The cook’s son has paranormal gifts that Verity vainly attempts to logically explain away. The boy sees the ghost of a Roman sentinel walking through the fields. Verity reminds him of his sister, so the phantom is determined to remain near her, watching over her and protecting her—which factors into the climactic scenes. The cook’s son also sees things before they happen and occasionally is consumed by other unseen presences.

As Verity begins the excavation work, she is joined by others including a handsome Scot named David so in addition to the ghost and the work, she finds herself caught up in romance.

I have loved every Susanna Kearsley book I’ve read. Her beautiful style reminds me of books I read while growing up; a modern-day Daphne du Maurier or Mary Stewart. The characters are complex, revealing themselves one layer at a time. The setting is described so exquisitely that I could smell the heather in the fields, the rain moving in, the fish market in the village. I could hear the shadowy horses thundering through the fields, I could feel the ghostly presence of one that can never leave his last encampment. Reading any of Kearsley’s books is truly an immersive experience.

There is a twist at the end that I didn’t see coming but in retrospect, all the clues were there, cleverly hidden in plain sight.

I definitely give this book five stars and I’m anxious to read another of Kearsley’s books as quickly as possible. They are addictive.

Watch my Book Tuber Video on The Shadowy Horses: