The Most Haunted Castle in Ireland

An Irish friend once told me that any self-respecting castle must have at least one ghost and in Ireland where the veil is thin, ghosts abound. So when I came across a castle that is purported to be the most haunted castle in all of Ireland, I knew I had to explore and Leap Castle does not disappoint. 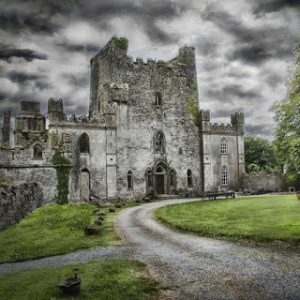 Leap Castle is located in County Offaly in the Midlands Region of Ireland, almost exactly midway between Dublin to the east and Galway to the west. The main castle—a simple square—was built around 1250 by the O’Bannon Clan, who was a secondary clan under the O’Carroll Clan. It is rumored to have been built on an ancient pagan ceremonial site and the land had been occupied continuously since Neolithic times.

The castle was added onto in subsequent generations, adding wings, a gatehouse and other structures until the castle became a labyrinth. In the chapel there exists a narrow, hidden door with a sudden drop and as the castle owners captured warring clan members, they were tossed several feet into that abyss where a spike awaited them. If they did not land in such a way to perish immediately, they were left to die an agonizing, slow death from their wounds as they starved and were left exposed to the cold and damp and the castle rats. In the late 1900’s when workers discovered the hidden doorway, they found enough skeletons to fill several cart loads.

The chapel itself is known as The Bloody Chapel for it was there in the mid-1500s that one O’Carroll brother warred against another for control of the castle. As one brother, a priest, conducted a service in the chapel, the other rose up and ran him through with a sword, killing him in front of the entire family.

In 1659, the castle passed from Irish hands to the English, who had colonized the island. Several generations of the Darby family lived there, including an arrogant, humorless man by the name of Jonathan Charles Darby. He married Mildred Dill (1867-1932) and fathered five children.

Mildred was a writer and was very much interested in the occult and what better place for the imagination to run wild than a castle haunted by dozens murdered within its cold stone walls. She often conducted séances in attempts to reach the other side of the veil and it is believed her journey across that dark, thin line awakened the most frightening ghost of all: The Elemental.

In 1909, she reported to the Occult Review, “I was standing in the Gallery looking down at the main floor, when I felt somebody put a hand on my shoulder. The thing was about the size of a sheep. Thin, gaunt, shadowy… its face was human, to be more accurate, inhuman. Its lust in its eyes, which seemed half decomposed in black cavities, stared into mine. The horrible smell one hundred times intensified came up into my face, giving me a deadly nausea. It was the smell of a decomposing corpse.”

They called this creature The Elemental and she and a number of her guests saw it several times during the decades she lived there. In 1910, her book The Hunger was published (now sadly out of print), the gothic horror inspired by the ghosts that inhabited her home and no doubt her dreams. As was the custom at the time, her writings were published under male pseudonyms, including Andrew Merry.

In 1922, the castle burned, the cause unknown, though Irish insurgents were suspected as the Darbys had continued elaborate expansions to the castle and raised the rents of tenants in order to pay for them—and in 1922, the Irish Civil War was in full swing. The Darbys left Leap Castle and Jonathan Charles Darby forbade his wife from writing any more novels. It was reported at the time that Mildred Darby had lost several manuscripts in the fire. The castle sat in morbid disrepair for decades as Ireland gained her independence from Great Britain and scores of Irish left for America and other countries around the world.

In 1991, musician Sean Ryan and his wife purchased the castle and since then, they have lived there while they have worked on restoring the castle to its former glory. They often hear voices, doors closing and footsteps when no one else is about, and many a guest has reported the presence of a woman that touches them on the shoulder as if to get their attention.

Sean prefers to call them spirits instead of ghosts, and he and his wife continue to offer private tours of the castle by appointment. (See http://www.visitoffaly.ie/Things-to-do/Culture-Heritage/Leap-Castle-Ireland-s-most-haunted-Castle/ for contact information.) It has been featured on many programs, including Ghost Hunters, Scariest Places on Earth, Most Haunted (see video below or visit https://www.youtube.com/watch?v=7IkqcxrZ3mQ) and Ghost Adventures.

Leap Castle and other haunted castles inspired the writing of A Thin Slice of Heaven. In the book, Charleigh has arranged to meet her husband during one of his business trips at the castle for a second honeymoon, but when she arrives she finds the castle deserted except for the couple that maintain it. Stranded by an unusual snowstorm, the castle comes alive with spirits from the past until she is trapped between two worlds. Watch the trailer below or visit https://www.youtube.com/watch?v=q7QYLfXSQeo.

Read an excerpt from A Thin Slice of Heaven by visiting http://pmterrell.com/a-thin-slice-of-heaven/.