The Ghost of Friar Hegarty 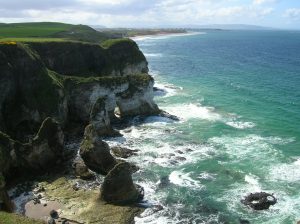 The Inishowen Peninsula rests at the northwestern corner of Ireland, a wild, untamed landscape with craggy rocks upon which the Atlantic Ocean whips and the winds pummel. It lies within County Donegal, one of the nine counties of the ancient Irish province known as Ulster and the location of my historical book, Clans and Castles, the first of the Checkmate series.

Two royal proclamations—one in 1606 and the other in 1611—sought to abolish the Catholic Church of which most native Irish belonged, and ordered that all Mass priests be banished from Ireland. The priests went underground, living in caves or harbored by parishioners; discovery could mean imprisonment or death. 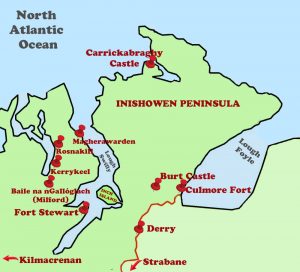 One brave Catholic Friar, Friar Hegarty, remained on the Inishowen Peninsula, tending to parishioners from Fahan—near the site of one of Cahir O’Doherty’s castles at Inch Island—to Desertegney, a combined area of more than 32,000 acres. At one point, he lived in a hut secluded in the heavily wooded area of Lisnakelly on the River Foyle; at other times, he found isolated caves in which to live. His congregation and his family provided him with food and necessities until 1632, when his own brother-in-law is said to have betrayed him to the Protestant authorities, English and Scotsmen that immigrated to Ulster during The Plantation Era of King James I.

As word traveled to Friar Hegarty that arrest was imminent, he was given a white horse to make his escape. If he could make it to Rathmullen by traveling the southern edge of Drongawn Lough before turning northward, a boat was awaiting him there that would take him to safety—perhaps to Scotland or to another Irish province where he could hide. But as he galloped away, the British soldiers spotted him and gave pursuit along the footpath above the craggy rocks. As he was passing over a hill, he was struck down from his horse, where he was quickly captured.

The soldiers dragged him to a nearby rock, forced him to the ground and beheaded him.

On the footpath where his white horse traveled, there lies the image of a horse’s hoof embedded in the rock, and on the rock where Friar Hegarty was beheaded, the sign of the cross formed. It was said that his head bounced nine times after his beheading, and each spot in which it landed remains bare to this day, unable to grow any vegetation, wild or planted. The rock itself is known as Friar Hegarty’s Rock.

Over the centuries, a white horse has been spotted galloping over the footpath, sometimes alone and other times with the ghost of Friar Hegarty atop it. The color of the horse is said to be otherworldly, illuminated even on the darkest of nights.

In the early 1990’s, some 360 years after Friar Hegarty’s murder, four teenage boys were quad biking dangerously close to the cliff’s 40-foot drop to the sea below. As they rounded the wild coastal route in the dark of night, a white horse suddenly appeared in front of them as if out of nowhere, rising high on its hind legs, its forelegs pawing the skies as its ethereal white coat illuminated the path in front of them. It so startled the lads that they pulled their four-wheeled motorcycle to an abrupt stop. And there, as they watched, the white horse leapt off the cliff’s edge but as they rushed to see whether it had landed on the craggy, deadly rocks below, the horse simply vanished into thin air.

Had the boys not stopped, they most certainly would have careened off the cliffs themselves to become impaled on the rocks below as they jutted upward from the sea.

And so it is that the white horse sent to save Friar Hegarty continues its mission today in saving others from certain death; unable to save the Friar, it is forever connected to him on his final day.

I love ghost stories. They have inspired ghosts in many of my books, including A Thin Slice of Heaven, Vicki’s Key, The Pendulum Files and Dylan’s Song. The area in which Friar Hegarty lived is the location in which my historical book, Clans and Castles, takes place. Read more about my writing at www.pmterrell.com.