The Ghosts of Burt Castle

Burt Castle was built during the 16th century in Ulster at the southern edge of the Inishowen Peninsula. Inishowen had been in the hands of the O’Doherty Clan for more than a thousand years and Burt Castle was only one of several castles that dotted the peninsula. It has seen its share of conflicts, intrigue… and murder. And throughout the centuries there have been numerous ghostly sightings, even today among the ruins.

Here is how I describe the castle in Clans and Castles, the first book in the historical Checkmate series—then keep reading for the stories behind the ghostly sightings:

Burt Castle rested at the southern edge of the Inishowen Peninsula like a silent sentinel keeping watch over the O’Doherty landholdings. It was constructed during the reign of Henry VIII and was considered a more contemporary style than earlier Irish castles. Built of the same limestone and rock that was found in abundance throughout Ulster, it rose three stories above the ground and at two of its four corners stood towers that reached another two stories before giving way to parapets that afforded a spectacular view of the Irish countryside—and even Derry, which was a only a few miles away.

Each wall was between four and five feet thick, the towers dotted with perforations for dozens of harkbus, along with larger openings for cannons.

There were two more stories below ground, comprised of dungeons, an armory and soldiers’ barracks and offices, eventually giving way to a stone wall that surrounded the castle and grounds, which was in turn encircled by a mote. With Ireland’s violent history of invasion ranging from the Vikings and Normans to the Spaniards and English—not to mention battles between clans—it was a formidable fortress built to withstand assault.

During the 16th century when Burt Castle one of the O’Doherty men seduced a young girl from the neighboring area—quite possibly Derry, which was only a short distance away. The lovers met as lovers do, and the girl gave up her heart and her body to the nobleman. Soon after, she discovered she was pregnant but when she informed her lover, he absolved himself from all responsibility.

She wanted marriage and all it meant for her unborn child: legitimacy, protection and a place in the O’Doherty clan. When he refused to marry her and turned his back on her, she became increasingly distraught. Over the preceding century, Ireland had turned from its original pagan religions to Catholicism and a bastard child would create a lifetime of hell for both the mother and the child. 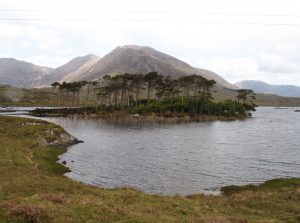 So on one night as the moon shone full and bright, she walked along the shore of the Lough Swilly, eventually wading in and drowning herself and her unborn child in its frigid waters.

Her father made a vow to avenge his daughter’s death and her undoing by the O’Doherty kinsman and he discovered through workers at Burt Castle exactly where her lover slept: in the vaulted, mural chamber on the first floor near the southwest tower. On one dark, lonely night when the clouds roiled and tumbled overhead, he tricked his way into the castle at the southwest tower and climbed from the ground floor to the first elevated story by way of the spiraled turnpike staircase and into the lover’s chamber where he slept.

There, the father withdrew his long knife, sharpened for the occasion of avenging his daughter’s death, and stabbed the O’Doherty kinsman repeatedly. To ensure that he was beyond resuscitation, he then dragged his body to the narrow window. Pushing it through, he tried to aim it for the craggy rocks at the base of the castle but it fell instead on a patch of grass close to the cold stone wall.

From that time forward, each time the moon is full, the ghost of a young girl is seen walking the shoreline of the Lough Swilly, her distraught wails caught on the winds and carried for miles, only fading when the figure wades into the water and disappears under the waves.

And on those nights, the swans rise up from their positions along the banks and fly to Burt Castle, where they begin wailing at the base of the old southwest tower where her lover was plunged to his death, a patch that even today grass will not grow…

Burt Castle figures prominently in Clans and Castles, the first book in the Checkmate series, and is haunted by more than one ghost… The book is a three-time award nominee: 2018 International Book Awards, 2017 USA Best Book Awards and 2017 Readers Choice Awards. Click here to read more and purchase the book with a free autograph or buy from amazon. It is also available in all fine bookstores around the world.