O’Doherty’s Rebellion took place in Ulster, Ireland in 1608. Chances are you’ve never heard of it but if you are of Scot-Irish descent, this was a significant event in your ancestor’s life. 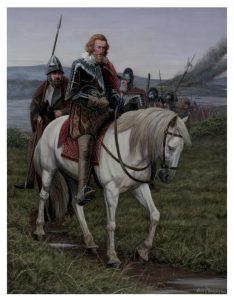 In the decades before O’Doherty’s Rebellion, Queen Elizabeth I sent English and Scottish troops to Ireland in an effort to colonize it. The Spanish Armada had come ashore in 1588; some accounts claim that the ships had been blown off course during a gale while others claimed that Spain intended to colonize Ireland. Concerned, Queen Elizabeth sent legions of soldiers to the island to prevent Spain from claiming it. The result were decades of war with Spain and with Ireland, particularly those fiercely independent clans in Ulster.

When King James I succeeded Elizabeth, colonization expanded dramatically. He offered Scottish Lowlanders the option of moving to Ulster in order to establish plantations. Scottish Highlanders were forbidden from participating because they had been a constant thorn in England’s side, whereas the Lowlanders were more likely to be Protestants and agreeable with the English monarchy.

One Gaelic Irish Lord was Cahir O’Doherty. He was a descendant of Niall of the Nine Hostages, one of the greatest High Kings of Ireland, and Cahir’s family had ruled the Inishowen Peninsula in northwestern Ireland for more than one thousand years. Cahir became the Lord of the O’Doherty Clan when he was only fifteen years old when his father passed away. It was a critical time in the nation’s history, as Sir Henry Docwra of England was under siege at Derry and both he and his soldiers were facing starvation or a soldier’s death.

Cahir made the critical decision to turn against other clans such as the powerful O’Neills and O’Donnells and he came to Docwra’s rescue. He fought alongside the English during the Nine Years’ War, becoming knighted and known as “The Queen’s O’Doherty” under Elizabeth, and becoming accepted in the Duke of Wales’ Court under King James.

But Docwra was soon replaced with Sir George Paulet, a man that did not hide his hatred for the Irish. Paulet became the Governor of Derry and participated in a scorched earth policy along with Arthur Chichester, who ruled all of Ireland for the English Crown. He was constantly attempting to seize the O’Doherty’s lands, although they had been protected by the Crown, and the two men became bitter enemies.

That all came to a head on April 19, 1608. Cahir had grown into a handsome man of 6’8”—incredibly tall for that time period. He wore a Spanish-style metal cap with a tall feather and often rode in front of his troops during battle, casting an imposing figure. On April 18, he tricked his friend Henry Hart, commander at Culmore Fort north of Derry, overrunning the fort and seizing all the weapons and munitions. On April 19, he marched on Derry.

George Paulet was so confident in his position at Derry that he did not have any soldiers maintaining watch and the village was caught off guard. Paulet and Sheriff Hamilton were killed along with a few English soldiers, and the entire village was burned to the ground. This event was to touch off O’Doherty’s Rebellion. The result would change Irish history forever, and it would make Cahir O’Doherty the Last Gaelic Irish King in all of Ireland.

After the Rebellion, King James I instituted a more massive approach to colonization, resulting in thousands of Scottish men, women and children immigrating to Ulster. Every person that claims a Scot-Irish heritage owes their history to the ancestors that emigrated from Scotland to Ireland during this period.

This is part of the story I have written about in my book, Clans and Castles, the first book in the new Checkmate series. The book is creative nonfiction; the events are all accurate and the characters are as well: colorful characters such as Sir Cahir O’Doherty, Niall Garbh O’Donnell, Phelim MacDavitt, The Maguire, Sir Henry Hart, Sir George Paulet, Sir Arthur Chichester, Sir William Stewart…

And William Neely, my ancestor. William emigrated from Scotland at the age of 18 to join William Stewart in the old O’Donnell Clan territory in 1608 in the months leading up to O’Doherty’s Rebellion. He would find himself in a war that initially England was losing, and he would find himself on the battlefield facing Cahir O’Doherty.

For William’s service during O’Doherty’s Rebellion, he was granted one thousand acres at the base of the Inishowen Peninsula, strategically located near Derry (now known as “the Slash City—Londonderry/Derry”) and Burt Castle (one of Cahir’s castles which can still be seen today). He became a sea captain, purchased his own ships and brought scores of Scottish Lowlanders and English to Ulster.