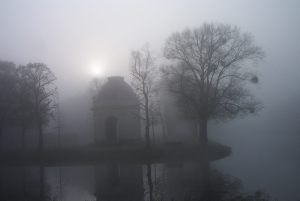 The winds whistled and swirled in the frosty night like a chorus of apparitions dancing and bobbing, leaving soft whispers against Dylan’s ear, enticing, cajoling, flirtatious and deadly. Ah, but they could drive a man insane on a night like this, he thought, pulling his collar tighter about his ears. He wore an Irish tweed cap and still the winds licked at his hair like fingers running through it, soothing, insistent and treacherous.

So begins the chapter in which Dylan Maguire traverses the Croaghgorms, the Irish word for “The Blue Stacks” and perhaps better known to visitors as The Blue Stack Mountains. It is one of Ireland’s major mountain ranges and is situated in County Donegal. One road cuts through, called the Barnesmore Gap, an isolated road that one wouldn’t want to travel alone. Stories of apparitions abound in The Blue Stacks and particularly along Barnesmore Gap, including one of a woman who hitchhikes in the dead of night, only to disappear while in the unsuspecting driver’s car. 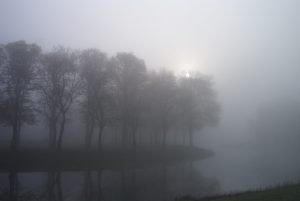 If you’ve ever been to Ireland, you know how mystical and magical it can be. The mists dance like phantoms, weaving in amongst the trees and the rocks until you aren’t quite sure whether otherworldly creatures are watching you, following you as you make your way. The winds can be cruel, especially when coming off the North Sea in the winter; as Dylan recalls later in the book, it’s the lazy winds that are the worst of all—called that because they’re too lazy to go around a man, they simply cut straight through him…

Donegal is situated in the Republic of Ireland but it is considered part of Ulster, the region that was divided from the Republic in 1921, making it part of the Border Region. It was after the Easter Rising of 1916 that Ireland won her independence from Great Britain, but six of the nine counties of Ulster were separated from the Republic, named Northern Ireland and is today considered one of four countries of Great Britain (along with England, Scotland and Wales). 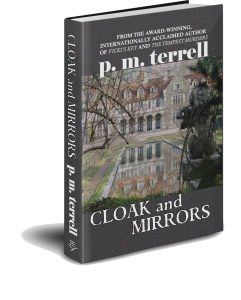 There was once a border between Northern Ireland and Ireland manned with guards but those disappeared after the European Union was formed, making it possible to travel between the two countries as easily as Americans travel between states. This also made it possible for Dylan, along with a Russian defector and a fellow Irishman, to travel through the Blue Stacks on horseback in Cloak and Mirrors, weaving between Northern Ireland and the Republic.

The mountains range from grassy slopes on which sheep graze to steep and rocky climbs. Occasionally, one will see an abandoned cottage with a thatched roof, most likely the home of a tenant farmer a century or more ago. The ground here, with little exception, cannot support crops so the tenant farmer and his family might have eked out barely enough to keep them alive, along with the more ample lamb they raised. In a region isolated and rugged, every bit of the lamb would have gone to good use, including the organs, the bones and the wool.

It is interesting to surmise what might have happened to the family; perhaps they starved during one of the Famines that struck Ireland with a savage vengeance. Or perhaps they were fortunate enough to migrate elsewhere; a costly, long and grueling journey across the Atlantic to America or to other countries around the world. They left behind a stone cottage that will stand for centuries longer, the thatched roof likely caving in, the area around the home overgrown as if the land is determined to claim it once more. All that is left in the haunted remains are the memories of what once was.

It is to one of these cottages that Dylan Maguire and his fellow travelers are heading en route to a rendezvous with a helicopter that is expected to receive the Russian defector and take him to America… If they survive.

I love writing about Ireland; the memories I have there are always warm even when the lazy North Sea winds cut straight through me. If you would like to read a chapter from my newest release, Cloak and Mirrors, that takes place in the Blue Stack Mountains and the cottage mentioned above, follow this link.

Vicki and Dylan discover the CIA can even hijack a honeymoon… While staying in a remote Irish manor house along the Wild Atlantic Way, they are directed to retrieve stolen documents on Russia’s newest stealth technology. But when the CIA asset decides to defect, their mission becomes much more complicated. And when they discover the Kremlin wants them captured, they’re in a fight for their lives.