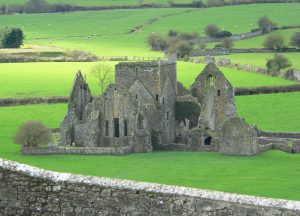 Everyone loves a wedding and what could be more idyllic than combining one with Ireland and Christmas?

In the sixth book of the Black Swamp Mysteries Series (to be released in 2017) Vicki Boyd and Dylan Maguire head to his native Ireland for their wedding and honeymoon. Researching traditional Irish weddings was a lot of fun; the hard part was not overdoing the ceremony and selecting which traditions would remain and which to discard.

Christmas is not the most ideal time to visit Ireland. The sun sleeps later, eventually rising at 9:00 am over Donegal in northwestern Ireland. It also sets around 4:00 pm, leaving a mere seven hours of daylight. They make up for it in July and August, when the Emerald Isle receives about 18 hours of daylight and the sun doesn’t set until after 11:00 pm.

The Irish like to say their weather is always mild, averaging between 50 and 70 degrees Fahrenheit year round. But this doesn’t take into account the winds and I’ve learned firsthand that the air currents off the North Sea can be frigid. In December, however, when the next parish over – Boston – can encounter snow and ice, Ireland remains in the upper 40’s and lower 50’s and rarely receives appreciable snow accumulation. 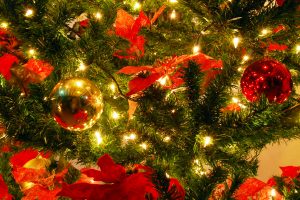 The nicest thing about visiting Ireland during the Christmas holidays (which end on the Day of Epiphany, January 6) is the combination of the magic of Ireland and the magic of Christmas. It’s an unbeatable combination.

Vicki and Dylan are wed by Dylan’s childhood friend, Thomas Rowan, who is now Father Rowan, in the village where they both grew up. The church is similar to the one in this blog. It sits atop a hill where it overlooks the village below.

One tradition is to place a tiny statue called The Child of Prague at the church on the morning of the wedding to ensure picture-perfect weather.

Another involves the use of the Magic Hanky. This is a handkerchief – often with lace trim – that is worn on the wedding day. When a baby is born to the couple, it only takes a couple of stitches to turn it into a cap for christening. Vicki wears the one that Dylan’s mother and grandmother wore at their weddings.

Vicki carries her bouquet by a handle called a Porcelain Horseshoe. When the couple moves into their new home, the horseshoe is mounted above the door, the opening at the top so their luck doesn’t run out.

She uses a traditional saying during her vows: “There are four things that you must never do: lie, steal, cheat, or drink. But if you must lie, then lie in my arms. And if you must steal, steal away my heart. If you must cheat, then cheat death. And if you must drink, drink in the moments that take your breath away.” 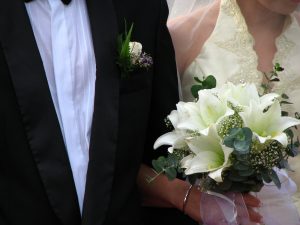 One thing I found particularly interesting was this vow: “Through all our lives together, in all our lives, may we be reborn that we may meet and know and love again, and remember.”

Sam gives away Vicki’s hand in marriage. They spend their first night at the cottage they first visited in Dylan’s Song before heading to a manor house in County Donegal.

There is a tiny matter for them to take care of during their honeymoon. Sam needs for Dylan to cross paths with a Russian spy, who will slip him a microchip detailing Russia’s newest stealth technology. It’s a simple assignment – except when the operative Dylan is supposed to pass it on to is abducted off the streets of Donegal. It pulls Dylan and Vicki into a whirlwind adventure – and brings Dylan face-to-face with a man he thought he would never see again.