The past two weeks have felt surreal with the arrival of Hurricane Matthew, the resulting storm surge and subsequent flooding in Lumberton, North Carolina. For those who have read The Tempest Murders, you’ll recall that it takes place as Hurricane Irene is barreling toward the North Carolina coast. Lumberton was in its crosshairs and though we received a lot of rain, Hurricane Matthew was far more destructive to the Carolinas. 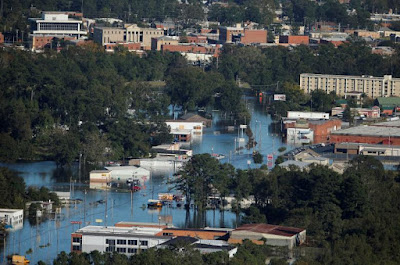 In the beginning chapters of The Tempest Murders, Detective Ryan O’Clery is investigating the murder of a young woman found along the banks of the Lumber River in clear view of the Robeson County Courthouse. In the picture here, the courthouse is the light tan building near the upper left, and the river is just one block away. It is normally the width of a few cars, but you can see from the picture how it flowed well beyond its banks to flood businesses, homes, streets – and anything in its path.

I was originally inspired to write The Tempest Murders when I came across information regarding one of the most massive storms in Ireland’s history, called The Night of the Big Wind. It took place on the day of Epiphany (January 6, 1839), a date that some in the religious community had forecasted the world would end. And the residents of Ireland must have thought the world was ending, because the winds came in at 115mph, literally blowing the Atlantic Ocean across the island as it tracked from west to east. The book actually begins as Ryan O’Clery’s uncle several generations back was returning to his home after a trip to Dublin, only to find that the water had washed away whole villages – and his lover. 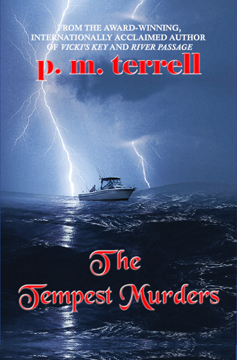 I was further inspired by Hurricane Isabel. In September, 2003 I was living in Chesterfield, Virginia, a county that lies between Richmond and Petersburg. At 3:00 in the afternoon, the skies became pitch black, the electricity and water abruptly stopped, and I retreated to a room of the house with my dogs. For more than twelve hours, I could hear the sound of 100+ foot tall oak trees hitting the ground and could only pray that none hit the house. It wasn’t until the next morning when the sun rose that I was able to look outside. Giant trees had fallen like matchsticks, one hitting the house next door to mine and more than two dozen falling in my yard – but thankfully, none hitting the house. They came down with such force that when one tree with a diameter of several feet was being removed from the front yard, they found another tree the same size embedded in the ground under it.

Then as luck would have it, I was living in Lumberton, North Carolina as Hurricane Irene came ashore. I have been extremely fortunate not to have suffered the devastation that many have, having lived through three hurricanes.

I’ve chosen to add extreme weather to my books because the weather can be a formidable opponent, one that is impossible to fight – and yet many must make life or death decisions in the blink of an eye. Weather can also place a critical time element on unfolding events, such as Ryan O’Clery discovering that his lover is a serial killer’s next target and history is poised to repeat itself.

I find books that pit ordinary people against extraordinary events impossible to put down, like The Perfect Storm by Sebastian Junger, regarding the true story of “the storm of the century”, the meteorological events that created it, and the crew of the Andrea Gail that was caught in its crosshairs. I knew as I was reading it that they could not fight an opponent with hurricane force winds and a sea bent on tossing the ship like a paper model, and yet I was riveted by the courage of the men who fought to keep their vessel afloat against all odds. (Shown here, actors portraying the crew of the Andrea Gail in The Perfect Storm, which also starred George Clooney.)

Hurricane damage may get a lot of publicity in the days after it occurs, but in reality it may take years to recover from loss and sometimes the losses are irrecoverable, leaving an imprint on people for the rest of their lives. The waters are receding in Lumberton. The town is filled with the friendliest people I’ve ever known, and during this time of need, I have seen ordinary people perform extraordinary feats. Will this experience inspire me to write Hurricane Matthew into a future book? Once the pain subsides, yes, I think so. After all, pitting man against the weather is as old a story as man himself.