A television series has inspired me to write another book based on my ancestors. I’ve become addicted to AMC’s series TURN, based on the book Washington’s Spies by Alexander Rose. When I fall in love with a book, a movie, a play or a television series, I always analyze it to discover what drew me in and kept me captivated. As I analyzed this show with its true story of America’s first spy ring, the Culper Ring, Benedict Arnold’s betrayal and all the characters that fought on both sides of the Revolutionary War, I began to consider writing another book about my own ancestors and their roles in the founding of America.

I have been interested for a long time about writing another book based on the Neely family, and when I journeyed to Ballygawley, County Tyrone, Northern Ireland, I began research on three brothers who left their home to make their fortunes in America. The year was 1720, and I found it fascinating that these brothers would leave everything they had ever known, travel for two months across the Atlantic Ocean, to a country they knew little about. Language, culture, and unrest under England’s heavy colonial hand would be only a few of the obstacles they would need to overcome.

The Neely brothers were Ulster Irish, or Scot-Irish, their grandfather having come to Ballygawley from Scotland when he was granted lands in County Tyrone as reward for fighting on behalf of the King of England at Londonderry. Though technically, they were originally from Ireland, as they had lived in County Tyrone in the 16th century but lost their lands there when they fell out of favor with another monarchy.

In 1720, the brothers could have remained in a large home with servants and land holdings, but they gave it all up to travel to America.

I learned that one brother became a very successful owner of a fleet of ships that carried goods back and forth from Londonderry to York City (now New York). He also carried native Irish who were fleeing the poverty of their homeland. Though my ancestors were Protestant, they were known for their empathy toward the native Catholic population, and they had even donated land for the Catholic Church and Catholic School, so it seemed completely in character that he would take them to a new land where they could escape the restrictions imposed upon them in Ireland.

Another brother became a merchant and pub owner in York City, but he doesn’t seem to have been cut from the same cloth. Racist and cruel, he drank himself to death at the age of 35. 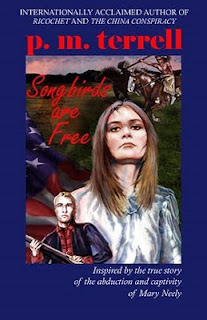 The third brother was my great-grandfather several generations back; he would become a successful merchant and gentleman farmer, living first in Philadelphia and later in Virginia. It would be his granddaughter Mary who traveled to Fort Nashborough at the height of the Chickamauga Indian Wars, only to be captured and kept as a slave for three years by the Shawnee.

My goal is to complete this book by the end of the year. It will be considered creative nonfiction, because it is inspired by the three brothers but to make it interesting and vibrant, there are liberties taken regarding romance, suspense, intrigue – and the quest for the American Dream. Stay tuned – I’ll be announcing it here when the book is scheduled for publication! [At right: Songbirds are Free, my most popular book, about Mary Neely’s capture, captivity, escape and journey home in a war-torn country.]

Update: As I continued my research, it led me back to 1608 when my ancestor William Neely left Wigtownshire, Scotland for Ulster. He was seeking his place in the world but what he found was adventure. Surrounded by clans and castles, including the last Gaelic King of Ireland, Cahir O’Doherty, and his extensive land holdings and numerous castles, he was soon caught up in O’Doherty’s Rebellion. I began a new series, Checkmate, which begins with William’s story – called Checkmate: Clans and Castles – and will eventually encompass the generations from 1608 through World War II. Below is the book trailer: