Wildfire at Midnight by Mary Stewart 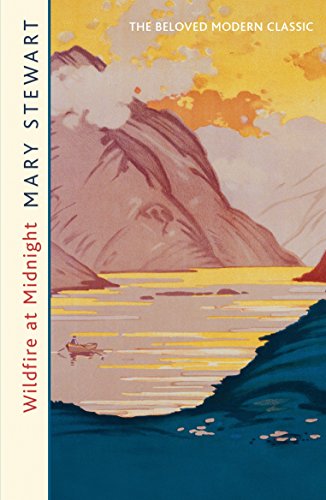 I just finished reading Mary Stewart’s book, Wildfire at Midnight. The book was originally published in 1956 and was re-released in 2011. Reading it was such a pleasure that it reminded me why Stewart’s books landed on the New York Times and other bestseller lists multiple times, and why many consider her to be the founder of the romantic mystery genre. Watch the video below for the full review or skip the video and read the review beneath it.

Mary Stewart was born in England but she died in Scotland, and her knowledge of the Highlands—and particularly of Skye, the book’s setting—is apparent. I do not fish and I have never climbed and never thought I would be interested in the details of either sport, though books on Mount Everest are among my favorites. In Wildfire at Midnight, the heroine—Gianetta or more commonly called Janet—is much the same. In need of a break from her job, she heads to a resort on Skye and runs right into her ex-husband Nicholas. Determined to remain there and enjoy her time anyway, she is soon caught up in the tension at the resort—a tension, it turns out, to have been brought about by a ritual murder on the mountain. It is a murder in which the resort’s guests are each suspect—all except Janet, who arrived after it had taken place.

We meet a wide range of characters, from cheating husbands to unhappy wives and when two women become lost on the mountain, the suspense ratchets up. One is found dead after her rope had been cut and the other nearly dead several days later. Now unconscious, Roberta cannot tell the authorities who the murderer is, and the killer makes an attempt on her again. Then another guest is found murdered, his throat slit—and our heroine, wishing for a quiet afternoon fishing, winds up in a fight for survival.

The action is fast, the words concise. Though it was written in the 1950’s, the heroine is surprisingly independent and quite capable of standing up for herself. After her divorce, she returns to a very successful modeling career and has become somewhat of a celebrity—though in the end, in typical 1950’s fashion, the book turns to a woman-in-jeopardy with a romantic ending.

There are twists and turns in this book, each time causing me to question which of the resort guests could be the killer—and it isn’t limited only to the men. Amid the suspense are the sweeping vistas of the mountains, the varying experience of the climbers, both the serenity and the dangers of a land that is so enticing and yet so unforgiving.

Mary Stewart wrote around 17 romantic suspense novels in addition to books in four other genres. If you haven’t read any of them, Wildfire at Midnight is a great place to start.